Claudia Jordan is formerly of RHOA and Now formerly of the Hot 107.9 Morning Show with Ricky Smiley! So word has been on the curb for a couple of weeks now that Claudia Jordan was fired from RHOA (Real House Wives of Atlanta) and now she has posted that she is no longer with the Hot 107.9 Rickey Smiley Morning Show any more.  Claudia says her last day was July 2, which happened to be during the Essence Fest weekend in New Orleans.  Claudia and the team broad casted from New Orleans and the team went back to Atlanta.  Did Claudia know at that time that she was leaving or getting the Ax, not quite sure.  I was at the WEN Brunch with her and Lisa Nicole of Married 2 Medicine and Claudia spoke on the panel and she didn't mention anything about not being with the show, actually she was quite chipper and upbeat.  Well where ever she decides to go we wish her well.  Good luck Claudia. Below is her farewell note to her fans about leaving the Rickey Smiley Show. What do you think about this, will you miss her?  Will there be a replacement?  Female/Male which do you think will work better? 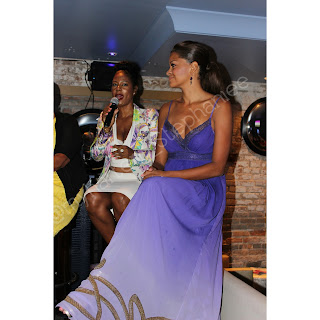 Claudia Jordan
n The Rickey Smiley Show for a year I am moving on to more opportunities. There are a whole lot of things I want to do that will better showcase my talents, personality, intelligence and wittiness and I'm ready to pursue them! I'm grateful to Reach Media and to Mr. Smiley for giving me the opportunity which in turn helped me have a reason to be in Atlanta to be on the Real Housewives of Atlanta which was another amazing opportunity that has brought me nothing but more exposure, more checks and more opportunities in film and many other things. To those that rode with me through the storm when I was trying to adjust on the show with conflicting advice coming at me from all angles-I thank you. To my critics-I thank you also because you pushed me and motivated me to do better. I know I'm the second female co-host to depart in a year but I have total confidence that they will fill that spot with someone that will do the damn thing and be able to stay forever! I'll miss the crew and made some real friends on the RSMS and I wish them the best.I also want to publicly say THANK YOU to Ebony Steele who was a total class act to me when I first started and has continued to check up on me and has truly shown me sisterhood despite everything. I can not wait to see her next move also. She's talented and a radio star! But lots of things are cooking as we speak and I'll post where you can catch me next REAL soon! XOXO CJ
Stephaniee MyHartEnt at 5:37:00 PM