Coming to a theater near you February 5 are you ready for the "4th Man Out" directed by Andrew Nachman, check out some clips and the trailer down below. 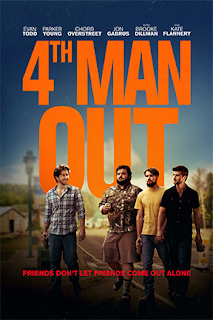 CLIPS NOW AVAILABLE!
Please feel free to share these with your readers. (And let us know if you need “PG” version — we are happy to provide them!)

4TH MAN OUT is COMING OUT on February 5th!

Directed by: Andrew Nackman | Produced by: Lauren Avinoam, Lauren Hogarth, Jed Mellick |  Written by: Aaron Dancik
Theatrical Markets: New York, Los Angeles, Atlanta, Phoenix, Cleveland, Chicago, Boston, San Francisco, Toronto — More TBD
Synopsis: 4TH MAN OUT stars stars Parker Young (“Arrow”), Evan Todd (“Switched at Birth”), Kate Flannery (“The Office”), Chord Overstreet (“Glee”) and Jon Gabrus (“Comedy Bang! Bang!”). A hilarious mash-up of man-child and coming-out comedies, the film examines a small-town, blue-collar guy who lets his friends know he's gay - and what happens when they try to help him find a boyfriend. Both brashly funny and daring in its exploration of the kind of gay man we rarely see on the big screen, the film enjoyed a run at the Seattle Film Festival and also played at Outfest where it won “Best Dramatic Feature” as well as Toronto’s Inside Out where it was awarded “Best Narrative Feature.”