Celebrity Apprentice 2016 Out With The Old 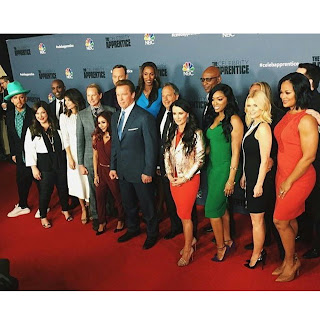 Celebrity Apprentice out with the old and in with the new!  Trump is gone and Arnold Schwarznenegger will be the new "Your'e Fired Guy" in the board room.  The new boardroom members sitting to the left and right of Arnold will be Warren Buffet investment guru, Steve Ballmer former CEO of Microsoft and the new mom Tyra Banks, Jessica Alba actress, and Patrick Knapp Schwarzenegger entertainment attorney and nephew of Arnold.  Now guess who made the cut to be on the new season and they have also moved the the West Coast to film?

Boy George - Grammy Award-winning singer, songwriter, lead vocalist for the pop band Culture Club, international DJ and a coach on the U.K. version of "The Voice", as well as a top fashion designer and photographer

Kyle Richards = actress, star of "The Real Housewives of Beverly Hills" and a philanthropist who owns an innovative boutique concept in Beverly Hills

Ricky Williams - Heisman Trophy winner for the University of Texas, 2015 College Football Hall of Fame inductee and ESPN sports analyst who was a running back for the Miami Dolphins, New Orleans Saints and Baltimore Ravens

As posted on NBC.com