RAGTRADE is coming to Atlanta October 1 check out all the details below. Are you ready? 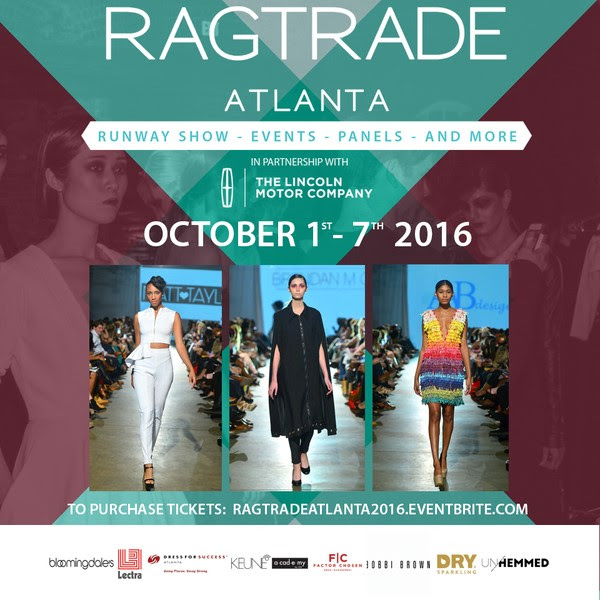 (ATLANTA) - August 25, 2016 -RAGTRADE ATLANTA, an award-winning fashion organization devoted to the discovery and promotion of top emerging fashion designers from around the globe, today announced their relationship with The Lincoln Motor Company to present the 3rd annual RAGTRADE ATLANTA Runway Show taking place October 5, 2016 at the Georgia Freight Depot.
The premier fashion event will include a night of industry-quality runway shows featuring the latest fall/winter 2016 collections on a shoppable runway show from a curated group of designers which include:
"Lincoln is excited to return to RAGTRADE with the modern and elegant all-new 2017 Lincoln Continental on display amongst Atlanta's finest in design," said Raj Register, multicultural communications manager, Lincoln. "Our customers share with Ragtrade and the 2016 designers a passion and appreciation for sophisticated and contemporary design."
A week-long series of events throughout the City of Atlanta are also being planned and will be announced at a later date.

The RAGTRADE ATLANTA Runway show began in 2013 as a runway event for local emerging designers around the Southeast and has since grown into a premier fashion organization that provides designers with year-long industry quality programs as well as partnerships and collaborations with influential fashion and luxury brands.
In addition to The Lincoln Motor Company, supporting sponsors for the 2016 RAGTRADE ATLANTA Runway Show include:
For tickets visit www.ragtradeatlanta.com.
Stephaniee MyHartEnt at 10:29:00 AM