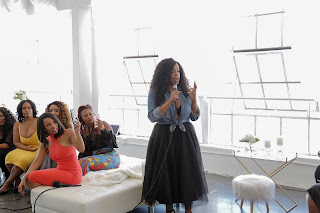 (LOS ANGELES, CA) - August 21, 2017 - Over the weekend celebrity publicists and TV personalities, Monique Jackson and Kita Williams, introduced their "SMART, FUN, FAB GIRLS" mini-conference. These two smart and creative ladies are on a mission to help fill a void that’s been created by the facade and false  images and lifestyle that reality TV and social media has created, especially for our young millennial women of color. Thus, they created a refreshing, new realm of thinking and blueprint for success for young women with their “SMART, FUN, FAB GIRLS” movement.

They brought together a panel of celebrity women before a packed house in downtown Los Angeles to kick-off it off including Niecy Nash, Elise Neal, Shanice and reality star & Kevin Hart’s ex-wife Torrei Hart. The panel of women shared their recipe to success, how to step in to your own light without a “like” button and understanding your power to win in life to an all female audience. They plan on bringing the “SMART, FUN, FAB GIRLS” mini-tour to a city near you. Check out @SmartFunFabGirls for more info.