When Love Kills on TVOne 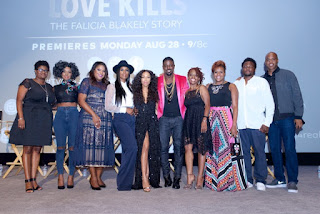 WHEN LOVE KILLS: The Falicia Blakely Story tells the tragic true story of Falicia Blakely, a teen mom from Atlanta who grows up in the fast-lane. When she becomes an exotic dancer, she attracts the attention of local pimp and predator, Dino. His empty promises of a life together turn Falicia into a pawn in his dangerous games, and she’s forced to prove her love for him at the expense of innocent lives.

“WHEN LOVE KILLS: The Falicia Blakely Story” premieres on TV One, Monday, August 28th at 9/8c.