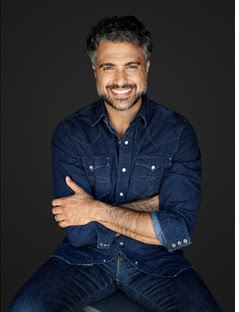 2018 Teen Choice Award winner for "Choice TV Actor in a Comedy," named by VANITY FAIR as one of the "Bes t TV Characters," Golden Globe award and Critics' Choice award nominee, Jaime Camilplays "the scene-stealing comedic bright spot," Rogelio de la Vega, the supremely vain, but totally well-meaning, famous telenovela star and Gina Rodriguez's father on the critically acclaimed CW series "Jane the Virgin," which returns for it's fifth and final season in it's new day WEDNESDAY, MARCH 27th at 9pm (after "Riverdale"). Camil also recently starred in the Academy Award winning Disney/PIXAR animated film COCO, and is now an official voting member of the Academy of Motion Pictures Arts & Sciences. Camil also recently wrapped production on his next film, MY BOYFRIEND'S MEDS, which he stars as the leading man for Pantelion (OVERBOARD, HOW TO BE A LATIN LOVER), which he is also executive produced through his production company, ECABA. Camil has also teamed up with "Jane the Virgin" creator Jennie Snyder Urman to co-executive produce the comedy series "Riches to Rags," with Alex Herschlag (executive producer "Will & Grace") tapped as writter. In "Riches to Rags," which Camil will also star in, when an outrageously wealthy trust fund baby is cut off by his father, he and his wife move into her sister's Reseda condo where they delight in the "charms" of the working class but mourn the loss of being the 1% of the 1%. The project is currently in development at CBS. 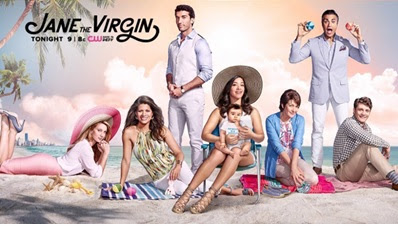 Camil's hit TV show "Jane the Virgin" centers onJane (Rodriguez), a hardworking religious girl who, due to a series of outrageous events, is accidentally artificially inseminated. "Jane the Virgin" has received overwhelmingly positive accolades from critics and viewers alike, including a Golden Globe nomination-the first EVER for the CW, was named one of the top 10 TV shows of 2014 by the AFI, won a Peabody Award and was also nominated for a People's Choice Award for Favorite New TV Comedy. The show has instantly become a fan favorite for celebrities as well, with such illustrious stars as Britney Spears, Juanes, Eva Longoria, Gloria Estefan, Paulina Rubio, Kate del Castillo, and Bruno Mars all jumping at the opportunity to guest star on the series. A parade of A-list stars is expected to return to the set for the final season, premiering Wednesday, March 27th.
Much of the praise for the show centers on Jaime Camil, who plays Jane's long-absent father and telenovela star "Rogelio de la Vega," who has gained a fierce fan following thanks to his effortless charm, comic delivery, and unusually endearing vanity. While U.S. viewers are only now discovering Camil, the man is a bona-fide superstar in Latin America, known most widely for his role in the telenovela La Fea Más Bella (Mexico's original Ugly Betty series). Camil also has a whopping 10 million followers on social media.
In MY BOYFRIEND'S MEDS, Camil stars opposite Sandra Echeverria (SAVAGES) playing Hank, a charming mattress store owner who meets and falls for Echeverria's Jess. When the two go on a surprise trip to an island resort, Hank forgets to bring the prescription medicine he takes for a string of disorders, meaning he is no longer able to control his various symptoms and things really start to go awry for the couple.
Camil also lends his voice in the Sony/Columbia Pictures animated film HOTEL TRANSYLVANIA 3 which is still in theaters nationwide, marking his third animated film in as many years having also been in Universal Pictures hit animated film THE SECRET LIFE OF PETS and of course, the Academy Award winning film COCO.
Camil, who made his Broadway debut in 2005 in Latinologues and most recently took a turn as "Billy Flynn" in Broadway's CHICAGO (2016), and starred as "Sam Carmichael" in the Hollywood Bowl's reprisal of MAMMA MIA! opposite Sugarland's Jennifer Nettles and actress/singer Dove Cameron this past summer. He has starred in over 20 award-winning films, including PULLING STRINGS and 200 CARTAS (alongside Lin-Manuel Miranda). Camil has led the highest-rated telenovelas of all time and has recorded four platinum-selling albums and has starred in many musicals in his native Mexico City, including West Side Story, Hook, Aladdin, and more. In 2005 he led the Broadway-bound musical The Mambo Kings.
Stephaniee MyHartEnt at 2:46:00 PM