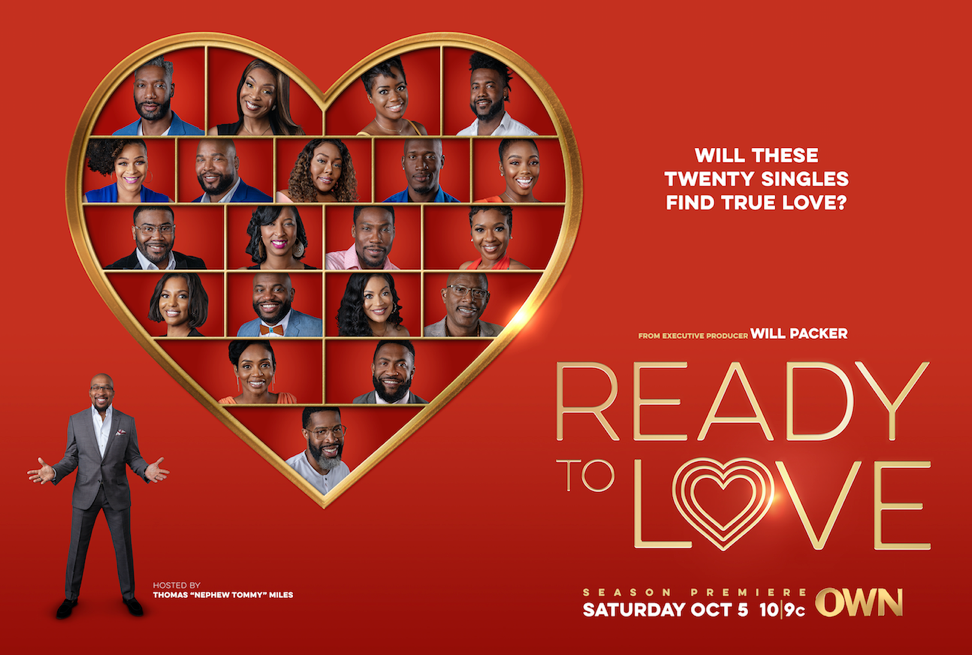 Downloadable links to images:
https://owncomm.box.com/s/ii5383y7woxjdncpqu4oi7wnavbidhmp (Key Art)
Courtesy of OWN: Oprah Winfrey Network
Los Angeles - OWN: Oprah Winfrey Network announced today that the highly anticipated new season of its hit dating series "Ready to Love" from Will Packer Media and Lighthearted Entertainment will premiere on Saturday, October 5 at 10 p.m. ET/PT.
Record breaking Hollywood producer Will Packer's popular dating series "Ready to Love," hosted by Thomas "Nephew Tommy" Miles, explores the real-life dating interactions of sexy, successful and grown Black men and women in their mid-30s to early 50s who are each looking for lasting love and an authentic relationship.
A unique twist on a typical dating show, "Ready to Love," provides opportunities for both the men and women to decide who stays and who goes as the tables turn weekly in the search for true love in Atlanta.
Over the course of its first cycle last fall, the series' Saturday average grew +78% in women 25-54 and +57% in total viewers, while driving OWN to be Saturday night's #1 cable network among African-American women 25-54.
Click below for the official new "Ready to Love" trailer:
www.Oprah.com/ReadyToLoveSeason2Trailer
"Ready to Love" is produced by Will Packer Media and Lighthearted Entertainment. Will Packer is executive producer. Will Packer Media's Kelly Smith, Lighthearted's Rob LaPlante and Jeff Spangler also executive produce along with Anthony Sylvester.
About OWN: Oprah Winfrey Network
OWN: Oprah Winfrey Network is the first and only network named for, and inspired by, a single iconic leader. Oprah Winfrey's heart and creative instincts inform the brand and the magnetism of the channel. OWN is a leading destination for a premium scripted and unscripted programming from today's most innovative storytellers. OWN's original scripted series include popular drama "Queen Sugar," "Greenleaf," "The Haves and the Have Nots," "If Loving You is Wrong," family saga "Ambitions" from box office hit-maker Will Packer, and the new drama series "David Makes Man," from Academy Award winner Tarell Alvin McCraney.
OWN's Saturday night unscripted programming lineup includes "Iyanla: Fix My Life," "Ready to Love," "Love & Marriage: Huntsville," and "Black Love." OWN connects with its audience wherever they are, inspiring conversation among a global community of like-minded viewers on social media and beyond. Launched on January 1, 2011, OWN is a joint venture between Harpo, Inc. and Discovery, Inc. The venture also includes award-winning digital platform Oprah.com. Access OWN anytime on WatchOWN.tv or across mobile devices and connected TVs.
Stephaniee MyHartEnt at 5:41:00 PM