The Have and The Have Nots Returning to OWN

OWN'S HIT TYLER PERRY DRAMA
'THE HAVES AND THE HAVE NOTS' RETURNS WITH A VENGEANCE TUESDAY, JANUARY 7 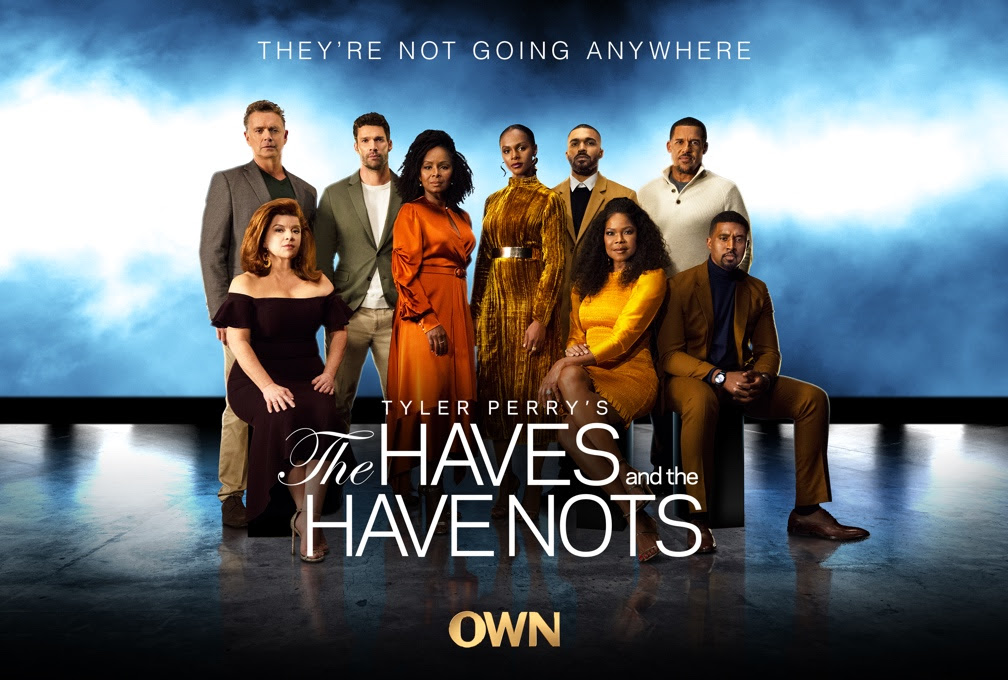 LOS ANGELES - OWN: Oprah Winfrey Network announced today the return of its hit Tyler Perry drama "The Haves and the Have Nots," which premieres its seventh season on Tuesday, January 7 at 9:00 p.m. ET/PT. The popular series comes back with a vengeance as the Cryer, Harrington and Young families fight for their very existence.
"The Haves and the Have Nots" is the #1 original cable series among African- American Women total viewers. It is also among the Top 5 original scripted series on ad-supported cable.
Season seven of "The Haves and the Have Nots" brings in even more havoc than ever before with revenge, heartbreak, betrayal, death and destruction touching the lives of every character. The series stars John Schneider (Jim Cryer), Tika Sumpter (Candace Young), Angela Robinson (Veronica Harrington), Renee Lawless (Katheryn Cryer), Crystal Fox (Hannah Young), Peter Parros (David Harrington), Tyler Lepley (Benny Young), Gavin Houston (Jeffrey Harrington) and Aaron O'Connell (Wyatt Cryer).
For a sneak peek of season seven click here: Oprah.com/HAHNSeason7Trailer
From Tyler Perry Studios, "The Haves and the Have Nots" is written, directed and executive produced by Tyler Perry.
About Tyler Perry Studios
Tyler Perry Studios is a state-of-the-art film and television production facility founded in 2006 by actor, producer, filmmaker, playwright and philanthropist Tyler Perry. Located in Atlanta, Georgia on the historic grounds of the former Fort McPherson army base, the new 330-acre campus is one of the largest production studios in the country. It boasts a variety of shooting locations including 40 buildings on the national register of historic places, 12 purpose-built sound stages, 200 acres of green space, and an expansive backlot.
About OWN: Oprah Winfrey Network
OWN: Oprah Winfrey Network is the first and only network named for, and inspired by, a single iconic leader. Oprah Winfrey's heart and creative instincts inform the brand and the magnetism of the channel. OWN is a leading destination for a premium scripted and unscripted programming from today's most innovative storytellers. OWN's original scripted series include popular dramas "Queen Sugar," "Greenleaf," "The Haves and the Have Nots," "If Loving You is Wrong," "Ambitions" and "David Makes Man." OWN's Saturday night unscripted programming lineup includes "Iyanla: Fix My Life," "Ready to Love," "Love & Marriage: Huntsville," "Family or Fiancé" and "Black Love." OWN connects with its audience wherever they are, inspiring conversation among a global community of like-minded viewers on social media and beyond. Launched on January 1, 2011, OWN is a joint venture between Harpo, Inc. and Discovery, Inc. The venture also includes award-winning digital platform Oprah.com. Access OWN anytime on http://WatchOWN.tv or across mobile devices and connected TVs.
###
Stephaniee MyHartEnt at 7:55:00 AM