Family or Fiance' on OWN

This Season There Will Be Disagreements, Heartbreak, Resolutions, and Healing, As Engaged Couples Seek the Blessings of Their Families Before Their Upcoming Weddings
From Bunim/Murray Productions, Hosted By Relationship Expert Tracy McMillan 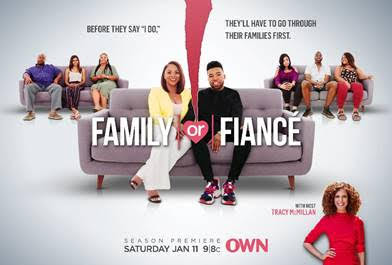 Los Angeles - OWN: Oprah Winfrey Network's hit reality series "Family or Fiancé" from Bunim/Murray Productions will return to Saturday nights with all new episodes starting January 11 at 9:00 p.m. ET/PT. The series hosted by relationship expert Tracy McMillan follows engaged couples who bring their disapproving families together for three days under one roof.
In this high-stakes social experiment, the couples and extended families participate in activities designed to strengthen their bond, unpack their differences, and show some very complicated relationships in a whole new light. In the end, the families' concerns might leave the couples to reconsider their unions, or revelations might cause any concerns to fall away.
Tracy McMillan returns as the voice of reason to work with the couples on ways to deal with their relationship problems and family issues head on in order to help resolve the conflicts that could undermine their future together.
Click HERE  for the official new trailer for "Family or Fiancé"
Catch up on the first eight episodes of the series on the
WATCH OWN app.
"Family or Fiancé" is executive produced by Gil Goldschein, Jonathan Murray, Julie Pizzi, Erica Ross, Jonathan Singer, and Erika Bryant of Bunim/Murray Productions in partnership with OWN: Oprah Winfrey Network.
Stephaniee MyHartEnt at 8:16:00 AM